The London Underground station for the British Museum is abandoned, what is referred to as a "ghost station" and, appropriately, it is said to be haunted by a ghost of a long-dead Egyptian Princess. The station operated during the first three decades of the 20th century, opening in 1900 and closing in 1933, when other nearby stations made it redundant. As early as the 1930s, possibly even as early as 1900, stories began to spread about the station being haunted by a wailing spirit that appeared in a loin cloth and an Egyptian head dress. This spirit is said to be the ghost of an Egyptian Princess named Amen-Ra whose mummy is stored at the museum.

The spirit is said to appear late at night within the station, wailing and screaming in the now-dead language of ancient Egypt, possibly in anguish over the desecration of her grave. It has been stated that, prior to the station being closed, a newspaper offered a cash reward to anyone willing to spend the night in it, potentially facing a vengeful spirit. Nobody ever took the paper up on the offer.

The haunting didn't remain confined to the British Museum station. After the station closed, aspects of the haunting moved up the track to Holborn Station.

In 1935, two years after the station closed, a movie named Bulldog Jack, loosely based on the Bulldog Drummond stories, made use of the story, and had as a plot device a secret tunnel leading from the British Museum to "Bloomsbury Station" (a fictional station clearly intended to be the British Museum station). It is often said that, on the night that this movie opened, two women went missing from Holborn Station, and never-described marks were found in the British Museum Station during the investigation.

It has also been said that, late at night, one can still hear the Egyptian spirit screaming if one is standing down the tunnel in Holborn Station. In fact, this is used in Keith Lowe's novel Tunnel Vision as the main character uses the story to try to scare his girlfriend.

Holborn station is currently decorated with images of Egyptian artifacts, as a way of advertising its proximity to the Museum, but to someone who knows the ghost story, these decorations seem amusingly macabre.

Holborn Station also has another ghost story, though one with scant details. During World War II, disused parts of the station were converted into offices, a dormitory, and cantine for government workers who needed to be protected from the Germans' night-time bombing. In the 1950s these facilities were used to house migrants, and in the 1960s may have been used as part of a military emergency facility near Holborn Station (I have been able to find very little on this latter use). Over the years, these facilities fell into disrepair and decay, and became rather eerie (look here for photos). The abandoned offices began to earn a reputation for being haunted, though the descriptions of the alleged haunting seem to be unavailable. 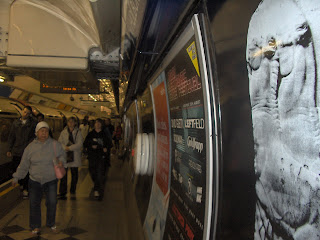 The Platform at Holborn Station

Commentary: Okay, so first things first, let's deal with the mummy. There isn't one. Mind you, there are plenty of mummies at the British Museum, but none of them belong to a princess named Amen-Ra. In fact, Amen-Ra is an Egyptian god, not a princess. The assignation of the Amen-Ra name to the ghost in the station comes from an artifact called "the Unlucky Mummy" which is, in fact, not a mummy but a lid for a burial that indicates that the grave's occupant was a woman, but gives no other indication of her identity. It was suggested by museum workers in the late 19th century that the grave might have belonged to a priestess of Amen-Ra, and in the popular imagination the alleged priestess (who may not actually have been a priestess anyway) has been given the name Amen-Ra, even though her name in life was probably something more like the Egyptian equivalent of Theresa or Betty (maybe Akana or Ebio).

The object was purchased by the British Museum in 1889, and Akana or Ebio or Theresa or Betty has since been blamed for all manner of problems (including the sinking of the Titanic). This item is probably worthy of an entry by itself, and I suppose I should give it one, but back to the matter at hand...

The story of the tunnel between the museum and the British Museum Station is completely fictional, it comes directly from the movie as far as I can tell. However, as happens, many people have chosen to believe that the museum's denial of the story is an attempt to hush up the truth rather than a statement of the truth. This is, on the whole, odd given that, if such a tunnel did exist, then the British Museum Station would have been an ideal place to store artifacts during the Blitz, rather than routing them down to Aldwych Station, as was actually done. 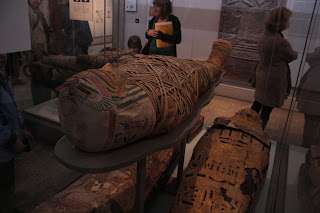 At the Egyptian Room in the British Museum

The stories of the women vanishing and the newspaper offering a reward for anyone willing to stay in the tunnels appear everywhere that the ghost stories appear. However, few verifiable details are ever given (Which newspaper? What were the women's names?), and as such they can't be completely disproven - but the urban legend experts over at Snopes have noted on many occasions that unverifiable details in a story are often red flags that the story is more legend than truth. So, they are great for the creepy story (I intend to use them when telling the story), but may not be true. That being said, missing persons cases are not uncommon in large cities such as London, but that doesn't mean that they are connected to a ghost, and early-20th century newspaper publicity stunts were also not uncommon. So, perhaps these events occurred, but perhaps they did not.

The haunting of the dormitory areas of Holborn station are disappointingly mundane - there's just a general reputation, no details given, pretty much as you'd expect for a disused place that is run-down and creepy. This is really too bad, as it would be great to have more detailed stories about the place. Regardless, the area has now been renovated and no longer has its creepy atmosphere, mores the pity.