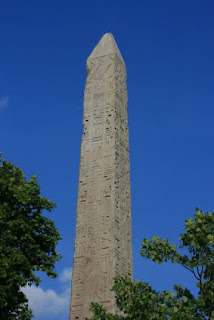 Cleopatra's Needle is a large, stone obelisk, taken from Egypt and placed on a parapet overlooking the River Thames in London. One of three obelisks taken from their homes to be placed in European cities, this one was sent to England as a gift to celebrate Admiral Nelson's victory at the Battle of the Nile in 1819, though it wasn't erected in England until the 1870s. During the journey, the barge carrying the obelisk capsized in the Bay of Biscay, killing six sailors and nearly sinking the obelisk.

Since then, screams, pained moans, and mocking laughter have all been heard in the vicinity of the monument.

It is claimed that this location is a popular spot for suicides, and the most common two ghost stories feature this: A naked phantom can sometimes be seen jumping into the river, but not making a splash; on one occasion in the 1920s, it is said that a police officer was summoned by a girl in Victorian clothing who alerted him that someone was about to commit suicide. When he reached the river, he saw the same girl tumbling into the river, and then vanishing. Other stories hold that the spirits associated with the obelisk may move the depressed and vulnerable to consider taking their lives when they otherwise wouldn't. 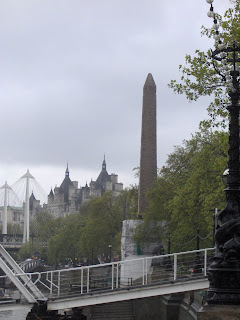 The rest of these are my photos.

Strangely, an apparition of a bear has also been seen in the vicinity. This is possibly because Chelsea was a venue for Bear-baiting during the sixteenth century, and probably has nothing to do with Cleopatra's Needle itself.

Commentary: The Needle is an interesting item for many reasons. Unlike many of the artifacts left from the ancient world to end up in London, the spire was sent as a gift and not simply looted*. Also, contrary to the name, the obelisk pre-dates Cleopatra by a considerable span of time.

There is an urban legend - that is, a story with no actual backing evidence that nonetheless gets spread around - that there are more suicides from this spot than any other on the Thames. The story is common, and one can't find a mention of Cleopatra's Needle that doesn't reference it, but it appears to be bunk. I have to wonder if it comes from the fact that Cleopatra is reputed to have committed suicide, thus leading to people looking for a suicide connection at the obelisk, despite the fact that it is not, in any way, connected to Cleopatra.

The connection with suicides is puzzling. The Needle is on the channel of the Thames at a place where the edges of the channel aren't particularly deep, and you would have, at most, a drop of 30 feet to the water below (I observed this while visiting, and can assure you that it is the case). During low tide, you'd probably quickly hit the mud beneath the water, leaving you dirty, wet, and annoyed, but very much alive. I suppose that the truly determined might lie face down in the mud to finish the job, but as Tower Bridge isn't that far away, and provides a much higher location to jump into much deeper water, it seems like a bit of a waste of time to try jumping off of the parapet for the Needle. That being said, for all I know, the Thames may have been different enough during the late 19th century that such a suicide plan might actually make some sort of sense. But nowadays, the claim that there are more suicides from this location than any other on the Thames seem more than a little suspect.

There are two sphinxes, cast in bronze (and British, rather than Egyptian-made) facing the obelisk, which is a reverse of how they would normally be placed (the job of a sphinx being to guard an object or place, not to stare at it). They were damaged in a German bombing raid during the first World War (or, as the English still refer to it - the Great War), as was the obelisk itself. It does make for a rather odd scene, as the obelisk is visible from a garden across the street: there you are, strolling through an English public garden, looking at the sculptures of famous Brits, and suddenly you come face-to-face with an obelisk and a couple of Sphinxes. It's as if someone was stupid enough to make Patrick Flanagan a city planner. 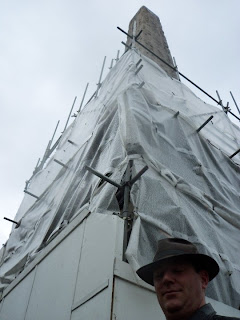 When I visited, the obelisk was covered in a box, as preservation work was being done. This is unfortunate in that I didn't get to see it, but it is nonetheless good to know that measures were being taken to protect a rather remarkable artifact. So, lacking access to the needle, my girlfriend and I decided to have our picture taken with the sphinxes. 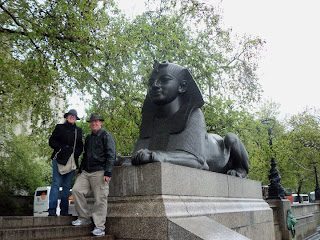 Because, really, if you're an archaeologist, there's great humor in having your photo taken with a fake artifact that has been erected next to a horribly misplaced artifact. 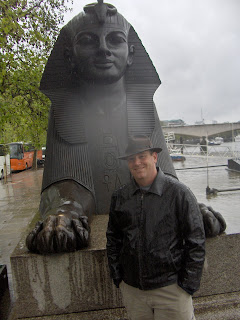 It was raining, those are NOT orbs.

Regardless of the details, the oddity of this item on the River Thames and the fact that people died bringing it to London were likely sufficient to ensure that it would forever more have some sort of story attached to it. And, if you're going to have a story, it might as well be a ghost story.

*Not that I have an opinion about such things. No, not at all.