Nina was a low-class prostitute who worked in the always-wet basement of a high-priced Merchant Hotel on Davis Street in Portland. The circumstances of her death are not clear - some say that she was killed by a jealous lover, some that she was killed by a pimp when he discovered that she wished to leave prostitution, some that she had struck a deal with missionaries who offered to help her escape in exchange for information useful in shutting the brothel down, and still others claim that she simply heard something that she should not have heard.

Whatever the motive, she was found dead at the bottom of the hotel's elevator shaft, apparently having been killed by the fall. Although it is thought that she was murdered, her murderer was never caught or convicted - not surprising, considering that Portland was about as lawless a town as one could find in the west during the late 19th century.

Since the time of her death, Nina has been seen wandering the building, always wearing a black dress. The building is no longer a hotel, but is currently home to Old Town Pizza. Patrons and staff alike have reported smelling her sweet perfume, hearing voices, especially in the basement, and having objects move on them. The staff of the Portland Walking Tours, who run a ghost tour in downtown Portland, have placed a bowl full of scrabble pieces, and it is said that Nina will sometimes arrange the letters to spell out messages.

Commentary: Portland, rather like my own home of Santa Cruz, is a delightfully strange town. The flavor of the town is odd, embracing everyone from the straight-laced businessman to the itenerant artist struggling to make a name for herself. Portlands better known institutions and businesses cater to the intellectual (such as Powell's City of Books) to the just plain wacky (such as Voodoo Doughnuts, which not only offers voodoo-doll doughnuts, but will also perform wedding ceremonies). This story has become part of Portland's folklore and represents both the way that Portlanders view their town's past (both celebrating it's seediness and strangeness, and being happy to be distant from those days) and the nature of the tourist traffic that comes through Portland.

In a city like Portland, it's not surprising to see a business such as Old Town Pizza embrace it's local ghost story as a way of drumming up business. And teaming up with a walking tour company provides even more opportunity. To be fair, though, this place doesn't depend on it's curiosity value to attract business, it also makes damn good pizza.

Regardless of what experiences that people have had in and around the building, it goes without saying that the desire to use this as a business tool, both on the part of the tour company and the pizza parlor, has likely resulted in the stories being exaggerated, not to mention probably led to more than a few encounters due to little more than the power of suggestion. Of course, the admittedly creepy

Personal Experience: My girlfriend and I visited Portland last year, and knowing my enjoyment of ghost stories, she booked us two spots on the ghost tour.

The tour was run as an "investigation" - meaning that we were handed electromagnetic field meters (EMF meters, for short) and told to use them while we were in supposedly haunted places. Our guide, a rather adorable small woman whose name I can not for the life of me recall, spoke excitedly about the ghosts of Portland and her own personal experiences (I'll have more entries based on experiences from this tour in the future). The EMF meters tended to spike sporadically, as one would expect in a major city with numerous electrical devices scattered throughout the landscape. However, every time one spiked, our tour guide would talk about the usefulness of these devices in locating ghosts*.

By the time we arrived in the basement in which Nina is said to spend most of her time, Kay and I discovered how to manipulate the readings on the EMF meters by flicking our wrists in particular ways and standing under particular pieces of electrical equipment. The fact that we were clearly intentionall manipulating readings didn't sem to dampen our guides enthusiasm. Of course, she probably gets smart-asses like this on the tour all of the time, and the fact that she managed to maintain enthusiasm despite this really speaks well of her work ethic.

*I've never understood this, as I can see no reason to assume that ghosts would cause changes to electromagnetic fields, and even if they did, I have yet to hear of a ghost hunter actually using this equipment in such a way that stray signals from various different devices can actually be ruled out.

Photos: I took some photos during the tour, in the haunted basement, and here they are:


The bowl of scrabble pieces set out by the tour employees: 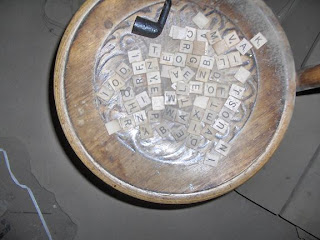 A photo from the haunted basement: 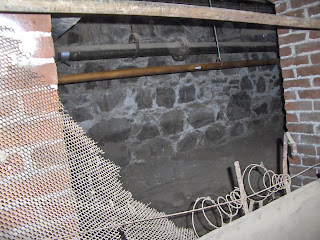 Another Photo from the haunted basement: 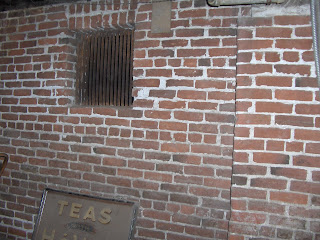 ...and, apropo of nothing, looking up in the courtyard of the haunted building. This photo contributes nothing to the story, I'm just showing off: 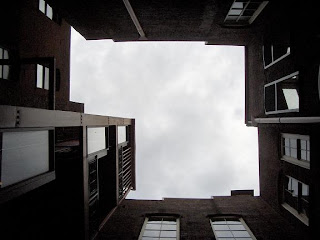