In Cheesman Park, a park and neighborhood in Denver, Colorado, there once stood an impressive mansion. The Henry Treat Rogers Mansion stood on 13th Street, at the northern edge of the neighborhood. 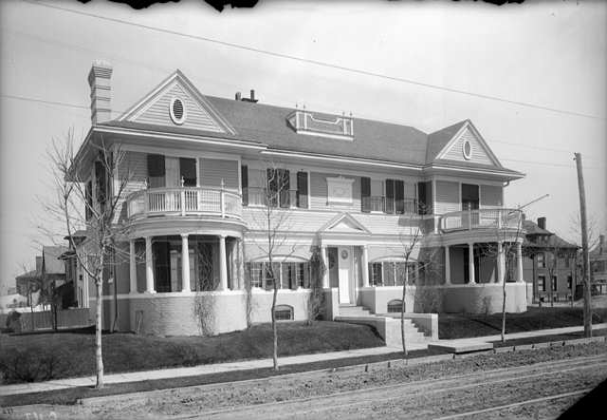 In 1968, Russell Hunter - who worked as a musical arranger for television, but would go on to be a notable screenwriter and playwright - moved to Denver.  He found the mansion, and was shocked at it's unbelievably low rent ($200 a month!).  So, he quickly moved in, and discovered why the rent was so low.  It seems that the house couldn't keep a tenant.

I must beg the reader's indulgence here.  All of the sources are pretty consistent in how the sequence of events is described, so this is paraphrased and condensed from the Haunted Colorado and the Spooky Mountain News sites.  I recommend checking them out for further details:

Within a couple weeks of moving in, Hunter began to hear banging and crashing from a bedroom fireplace.  The noise stopped when, one morning, Hunter yelled "stop it!" in the direction of the racket.  However, after the noises stopped, they were replaced by even stranger phenomenon.  Doors began opening on their own. The walls began to vibrate, knocking hung objects onto the floor.

As time went on, Hunter met a woman at a bridge game* who told him that she knew there was a poltergeist in the house, and a man at a social gathering (of type left unspecified*) who informed him that there was a hidden third floor that could be accessed through a stairway hidden in one of the house's many closets.

Once he found the staircase (one source states that he had to get help to bash open the back of a closet), Hunter found a hidden bedroom in the attic containing the journal of a nine-year-old boy who was crippled, and whose family had locked him in the attic bedroom to hide him away. The journal stated that the favorite toy of the child was a red rubber ball, which then began appearing around the house.

Hunter called on a well-known medium (whose name is never given in any of the sources that I have seen - readers, if you have found it, please let me know) to come and help him understand what was happening.  The medium held a seance, and during the ritual it came out the the spirit haunting the house was indeed that of the 9-year-old.  He had been placed in the attic, but stood to inherit a fortune from his grandfather.  The child died before receiving it, but was replaced with an adopted orphan who had a similar appearance (though better health). This replacement child grew up to be a successful industrialist, gaining advantages from the money inherited from the dead child's grandfather. Meanwhile, the body of the actual grandson was buried in a secret grave, and a house was later built at this site.  The medium told Hunter that, should he go digging below the bedroom of the house over the grave, he would find a gold medal that would prove that this was the final resting place of the child.  As a final step, the spirit threatened harm on the family living in the house if they did not allow the grave to be exhumed.

Seeking to make his house livable again, Hunter approached the family who lived in the house to see if they would let him dig up the grave.  Although reluctant at first, the family gave permission after a series of incidents that nearly harmed their children.  A gold medal was, indeed, found in the designated location under the house.

Still, this didn't bring hunter peace.  A glass door blew up, injuring Hunter.  Bedroom walls shook.  When the house was later demolished in the 1970s, some of the walls exploded, killing a bulldozer operator.

Hunter moved to another residence, but continued to experience the same sorts of troubles.  Finally, Hunter called in an Episcopalian priest who performed and exorcism.  And it is there that the story seems to end...

...except that people still report strange happenings throughout Cheesman Park, including at the location of the now-demolished house.  It's the usual stuff: orbs in photos, voices, cold spots, feelings of dread, etc. Still, it was probably inevitable for a neighborhood built on what was once a cemetery.

*Seriously, this young show-business guy was spending time at bridge games?  Maybe the sixties weren't as swinging as everyone likes to claim.

*So, as it is never stated what the gathering was, I choose to restore some of this guy's sixties cred and declare with no evidence whatsoever that is was a LSD-infused Beatles listening party/orgy.

Commentary: Russell Hunter wrote what is easily my all-time favorite horror movie: The Changeling. If you have not seen The Changeling (the 1980 horror movie, not the 2008 drama), then you really should. It is a very effective, spooky movie that really earns its scares - there is no gore and little action, this one simply piles on the eeriness and dread until everything seems menacing.  To date, every time that I have shown the movie to people, there is one scene where everyone jumps: two characters walk into a hall and see a particular object - the object doesn't move, doesn't do anything at all...but it isn't supposed to be there, and by this point in the film, THAT is enough to get the audience scared.

If the haunted house movies of the 1950s had aged better and were still seen as scary (rather than just cheesy), they might look like the Changeling.

But what of this story?  Well, the story, as told, bears a striking resemblance to the plot of The Changeling, and Hunter claims that the film was based on his experiences in this house in Colorado.  However, the main source for information comes from a 1980 interview...around the same time that the film was released, which makes me think that there is more marketing than menace in the house.  The newspaper reports (linked to via the sources below) also cite a priest who is said to have performed an exorcism as a source, but it is unclear as to whether he was interviewed, or if that was also taken from the 1980 Hunter interview and then simply repackaged in a later newspaper story.  Add to this that the people who Hunter states told him about the hauntings are never clearly identified, and the name of the "famous medium" - the person who would likely be the easiest to identify and ask about the story - is never given...and we find ourselves with a story that is impossible to check out...almost as if someone intended to create a story that couldn't be falsified in order to publicize a movie...hmmmm....

More recently, bodies were found during infrastructure work at Cheesman Park - not too terribly shocking as the park was the Mt. Prospect Cemetery from the mid-19th century until ca. 1893, and the bodies were removed when it was converted into a park and residential area.  My own experience of 19th century cemeteries is that there are often bodies that are easy to miss if you don't know where to look...and reports from the time indicate that the workers weren't showing much respect to the remains. Although some have tried to claim that these bodies are the source of the hauntings, I have been unable to confirm that the bodies were even found near the house, plus this veers into "built on an Indian Burial Ground" territory.  So, yeah, I'm not feeling so compelled by this line of argument.

Still, it's a great old haunted house story, and it is tied to one of my favorite movies...so while I may not buy it, I do like the story and I do intend to tell it as often as I can.

Bonus Video: And here is the trailer to The Changeling.