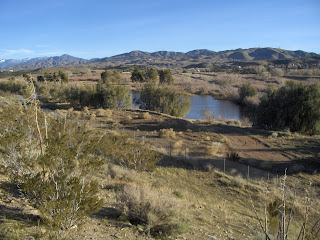 Lake Una, located south of the City of Palmdale and immediately east of the reservoir Lake Palmdale, is a small lake or pond. Although the presence of such a body of water is remarkable within the arid desert environment, it appears otherwise uninteresting on first seeing it's placid water and rather typical local vegetation.

But, of course, it has it's stories. It is said that people approaching the lake at night have encountered a dark figure in clothing that appeared to be a fisherman's, telling them in slurred speech to leave the area. People have also reported seeing dark figures climbing into the trees and vanishing at night. 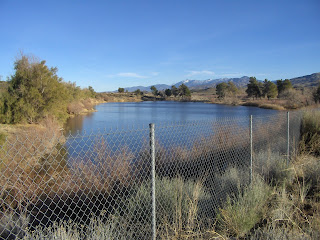 In addition to these ghostly phenomenon, some locals tell of a strange creature - never described - that sometimes emerges from the lake to devour whatever animals it can lay hand (um...teeth?) on. The lake is reputed to be bottomless, and it has been claimed that at least one diver has vanished while looking for the bottom, and that bodies of murder victims have been dumped in the lake never to be seen again. One story even holds that a school buss once ran off of the Sierra Highway (immediately adjacent to the lake) and neither it nor the driver or children in it were ever found.

Should you wish to enter the property, it is fenced off and private security has been known to patrol the area. So, this is one that is best viewed from afar.

Commentary: This is one of those entries that illustrates both why Shadowlands is simultaneously a wonderful and a terrible website for ghost story enthusiasts. This website contains the simple description: "Ghost of a fisherman has been reported to lash out, slurring viciously, ordering them to leave, also tales of black figures climbing into the trees and vanishing" complete with the weird phrasing and grammar. As I understand it, the webmaster of Shadowlands doesn't create these descriptions, but rather posts what is sent in. On the one hand, this allows us to quickly find ghost stories for most towns in the United States (as well as a few other countries), on the other hand the stories are often so brief, garbled, and confused that it can be difficult to do anything with them. So it goes.

Because Shadowlands is so useful for locating ghost stories, entries on the site are often simply copied and pasted into other websites, so if you go looking for Una Lake ghost stories online, you'll usually find a direct copy of the above-quoted sentence. Again I have to wonder if our reliance on the internet isn't a double-edged sword, allowing more access to stories, but also freezing them in (often lame and inane) forms rather than allowing them to grow and warp as folklore should.

Okay, so a bit o' science: Una Lake is what is called a rift lake or a sag pond (yes, there are technical differences between them, but I have been unable to find out which one best describes Una Lake). It sits on the San Andreas Fault, in a depression caused by the movement of the fault. Nearby Lake Palmdale (nearby as in "across the street") is in a similar basin, where a small natural lake has been turned into a larger reservoir (edited to add: the 1915 USGS topographic map for the location shows Lake Palmdale labeled as Una Lake, with the part now known as Una Lake being the eastern extent, cut off from the rest by the railroad, which appears to have been built on fill soils - so much for the bottomless lake, and thanks to one of the commenters below for pointing me to this map). A bit to the west, Lake Elizabeth is in a similar geologic formation. There has been a small lake within what is now Lake Palmdale for centuries, and it appears that Una Lake was part of this larger body. Regardless, the alleged depth of the lake may be due to it being on the fault and potentially between two cliffs....or it may be complete nonsense, I have been unable to find a reliable source of the lake's actual depth.

Incidentally, my favorite entry from the comments on one of the "illustrious internet" entries in the sources below comes after a description of a cross erected near the lake that supposedly commemorates a murder victim. The commenter simply states "i broke that guys cross off nd threw it in the lake" (sic). Nobody feeds the troll, which is a shame, as it would likely have been hilarious.