Robert the Doll and the Artist House, Key West, Florida

The story begins in the late 1890s, when the Otto family moved into a large house in Key West, Florida. The Ottos had a young son named Robert Eugene Otto. Among the large cast of servants serving the Otto household was a Jamaican woman who served as either the nurse or the nanny for young Robert. This woman fell afoul of Mrs. Otto, the reason why is unclear. Some say that it was inappropriate behavior with family members, others that the woman was caught engaged in a Voodoo ritual, but regardless, the woman was soon sent away from the home.

At some point before the Jamaican woman left, accounts differ on whether this was before or after she fell out with Mrs. Otto, she gave young Robert a gift of a doll (some versions claim that the doll contained a crystal made to hold the soul of the woman's deceased son). The doll, dressed in a sailors outfit and clutching a small stuffed lion of its own, soon became a favorite toy of the child's. Accounts differ on whether or not the boy went by his middle name before he received the doll, but it is clear that after he received the doll, which he named Robert, young Robert Eugene began simply going by the name 'Gene'. He is said to have taken the doll with him to all places, whether at play, at dinner, in bed, or on a trip away from the house. The two were inseparable, and the boy seemed very happy with the doll (It should be noted that some versions of the story reference Robert Eugene having had a sister who died around this point in time). 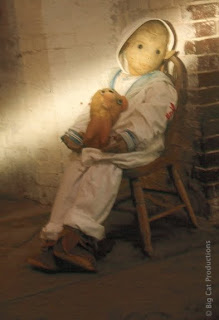 But, gradually, things began to change. People in the House began to hear Gene playing with the doll, only to have his voice change to a harsh and insistent tone when it was the "doll's voice", which was usually followed by Gene's own voice becoming pleading or frightened. Whenever anyone went to see what Gene was up to, they would find him in a room, cowering in a corner or against a wall, while Robert sat in a chair, on a ledge, or otherwise elevated and facing Gene. Around this time, many of Gene's other toys began to be damaged or mutilated, as if vandalized by a truculent Robert.

Still, Gene wouldn't allow himself to be separated from Robert.

Shortly thereafter, matters got worse. Rooms that nobody had been in were found trashed, clothes were shredded, other objects smashed, and each time Gene insisted that these had been the actions of Robert. Gene would wake up screaming in the night, and his parents would enter the room to see Gene in bed, furniture knocked over, and Gene insisting the "Robert did it!" It is said that the doll would sometimes emit a high-pitched giggle when others were around. And it is sometimes claimed that members of the household would see Robert move out of the corner of their eyes.

Eventually, the family had had enough. Mr. and Mrs. Otto put Robert in a box and placed him in the attic. There are two different versions of what happened after that. In one version, Robert was forgotten, and life went on in a bit more normal of a fashion. Gene left, established a reputation for himself as an artist, got married, and returned to the house after his parents death. At this point, he and his wife found Robert in the attic, and brought the doll downstairs as part of the decoration for their new home. In this version of the story, Robert was put into the Turret Room, which Gene was using as a studio.

In the other version of the story, Robert was not silent in the attic, but made a good deal of noise and created chaos until he was brought down. He was given back to Gene, who continued to live in the house, even after his parent's death, becoming an adult but retaining his attachment to and fear of the childhood toy. Gene maintained the Turret Room as a childhood bedroom, complete with children's decorations and toys, and had a place of honor, either on a special chair or the window sill, for Robert. Robert continued to mutilate other toys, and apparently to bully Gene, even as Gene became an adult. Gene eventually married (gender relations were, apparently, very different in the first half of the 20th century), but the marriage soon turned sour due to Gene's insistence on the doll accompanying him at all times, even being given a chair by the couple's bed at night. However, being the first half of the last century, having a spouse in a weird codependent relationship with a bullying toy was not grounds for divorce. Or so I am told.

Regardless, Gene and his wife Anne were living in the house as an adult, and Robert was present in the home during this time. The story holds that, during this period, children began to rush past the house, for fear of being spotted by or seeing Robert in the house's windows. It is claimed that neighbors would report seeing Robert change position in the window or even move from window-to-window within the house, and that visitors to the lower floors of the house could hear Robert walking in the upper floors of the house.

Gene died in the early 70s, and Anne, who had always loathed the doll, had it put in a box in the attic. The house was abandoned for a time. It was re-occupied a few years later by a couple who had a 10-year old daughter. On looking through the house, they found Robert in a box in an attic, and he soon became one of their daughter's toys. Again, a child found pleasure in playing with Robert for a time, but before long the girl began to wake up screaming in the night, claiming that Robert had moved around the room. She claimed to have been attacked by the doll, and more than thirty years later still claims that hse was physically assaulted by the doll, and believes that the doll wanted to kill her*.

The doll was once again put in the attic, and many stories hold that the doll could be heard walking at night.

Eventually, the doll was moved to the Fort East Martello Museum. It is now brought to the Key West Museum of Art and History (formerly known as the Old Post Office and Customs House) each year around Halloween. It has also featured at the paranormal convention TAPScon. People who have viewed the doll claim that the stuffed lion that it holds mysteriously changes the hand it is held in, and that to mock the doll or take its photograph without its permission will bring trouble. The trouble may include simple bad luck, or may involve being tormented by a small creature - about the size of the doll- that is only ever glimpsed out of the corner of the eye. Permission to photograph may be obtained by asking the doll, and if it moves its head to the side, permission has been granted. The museum has letters from people asking Robert to life the curse, suggesting that not enough people know when to leave a freaky-ass doll alone.

The Otto house itself is said to have been tainted by the doll. Now known as the Artist House, a bed and breakfast, it serves visitors to Key West. Even without Robert present, mischief occurs, noises are heard, and people are made to feel uneasy. Local legend holds that you can still see Robert's face peering out the window of the Turret Room. Stories have also been told that the ghosts of both Gene and Anne have been spotted, and even interacted with, at the Artist House. This means that we have not only a haunted object, but a haunted house.

*I honestly never thought I'd have a reason to write "the doll wanted to kill her". Hobbies take you to some strange places.


Commentary: There are oh, so many things that make the story of Robert the Doll a wonderful gift to ghost story enthusiasts. First and foremost, it's a damn creepy story. It's scary, unnerving, and makes you think about the nightmare potential of the local toy store. It's a good story to tell when sitting around a fire at night, or on a late-night walk with friends. It is everything that an effective ghost story should be.

It is also much more.

Okay, first off, even if you don't believe in the supernatural, even if you don't buy that the doll was haunted or possessed, you still have the story of a child who was disturbed enough that his imaginary friend became an imaginary bully and tormentor. This story includes both the typical bullying behavior from the doll alter-ego, and includes the destruction of property and potentially other violent acts perpetrated by the child against himself. This is the stuff of horror without any supernatural elements. Add to that the fact that, in at least one version of the story, the child never quite grows up, becoming something of a cross between a child and a man, and clinging to a toy that is both a comfort and a curse. Stephen King could have had a field day with this one*. And, really, how could this reading of the situation not be there, what with the doll even being named after the boy?

If you do believe in the supernatural, then you have a situation where either something initially sweet became corrupted and evil, or where something malevolent arrived in the guise of an innocent toy and showed it's evil intent only after worming its way into a child's life.

Either way, it's the stuff of nightmares.

And then you have all of the weird layers of subtext that appear in different versions of the story. For example, it's difficult not to see variations of the story in which Gene refuses to give up the doll even as he grows into adulthood as stories about the anxiety of growing up and leaving childhood behind, as well as the realization that childhood wasn't as ideal as people tend to think it was.

Variations of the story focus on the woman who made the doll and gave it to Gene, making a good deal of her origins on the Caribbean islands. It is often claimed that she was proficient with Voodoo, and that she was dismissed from the household after being caught in the act of a Voodoo ritual. Versions of the story that focus on this "Voodoo angle" come in two flavors, both of them interesting: 1) those that play up the "dark menace" of Voodoo, and these are typically steeped in a more subtle version of the racism of the early 20th century - focusing on the alien and exotic nature of the woman and her religion; and 2) those that focus on the power imbalance between the servant and Mrs. Otto and indicate that the firing of the servant was more a case of racial prejudice and religious intolerance. The former are "old fashioned" in the sense that they reflect the residues of attitudes towards rae and religion left over from a bygone era, the latter are more modern variations.

And, of course, Robert the Doll has become a tourist attraction in Key West, so it is little surprise that the story has been spread and celebrated by local business.

*And if he does, please pay royalties to Matthew "Sluggo" Armstrong.**