The Screaming Skull of Bettiscombe Manor

Azariah Pinney, a man of truly ill-repute by most stories, travelled from England to the West Indies (AKA the Carribean) in 1685. Some stories hold that he was banished, others that he had business dealings. Regardless, on his return he brought with him a slave, a man of African-descent who was poorly treated by Pinney. Pinney died and passed the estates on to his son and, after a time, the slave began to die - whether from the effects of his mis-treatment or a disease contracted in England is unknown - and he stated that he wished for his body to be returned to the Caribean for burial.

Unsurprisingly, Pinney refused the cost of returning the body, and instead buried him Bettiscombe churchyard. Shortly afterwards the house became the center of stramge moands and screams, and objects moving of their own accord. After a while, the body was disintered and brought into the house while Pinney tried ot figure out what to do with it. As soon as the body entered the house, the frightening activity ceased. The soft tissue eventually deocmposed, and over time the bones became lost until only the skull remained.

Since then, many attempts have been made to be rid of the skull. One owner of house threw the skull in a pond, only to have the haunting start up again - it didn't take long for the unfortunate man to pull the skull out of the pond and return it to the house. On another occasion another owner dug a deep pit and buried the skull at the bottom, only to walk out the next morning and find the skull sitting on the ground on top of the now filled-in hole.

Commentary: The screaming skull phenomenon seems to be a type of gohst story unique to England, which is rather odd when you think about it. There are many screaming skull stories (many of which will no doubt eventually show up on this site), but most of them seem to have a few things in common: the skull is associated with an impressive house or similar building, some form of non-aural haunting occurs (poltergeist activity, horrific storms, apparitions, etc.), the skull must be kept inside of the house or some misfortune will occur, most of the stories date to the 16th or 17th centuries, and there is usually a connection to nobility (the skull belongs to a noble person, their servant, or their victim). Interestingly, despite the name of the story (the screaming skulls) not all skulls scream in these stories.

Every source that I have found states that the Bettiscombe skull was examined by archaeologistsa and determined to be a few thousand years old and female, and therefore not the skull of a 17th-century slave.

The concept of keeping the skull in a house will strike most of us as morbid, grisly, or disgusting. However, it should be noted that this has not always been the view. At least since humans began to settle in permanent villages and towns, interring the dead in our places of residence, whether in an attached cemetery, under the home, or within a receptacle in the home, has been a common, though by no means universal, practice. In more recent times, skulls have been kept as trophies - a peice of Californian folkore holds that the severed head of the bandit Joaquin Murietta was kept in a jar in a saloon for decades after he was killed by lawmen, and the posession by American GIs of skulls taken from Japanese dead during WWII was common enough, acoording to forensic anthropologist Dr. William Maples' memoirs.

During the 19th and early 20th century, a variation on this type of practice was seen in death masks - casts of the faces of recently dead friends and family members used as decoration in people's homes.

Whether this practice is the source fo the screaming skull legends or not, I can not say. But it may at least explain why people of the 16th and 17th centuries didn't find it too odd to have a skull hanging around the house.

The Aldwych underground station in London is a ghost station in two senses. It no longer serves as an active subway station, but is maintained and used to throw parties, show art exhibitions, and is frequently used as a movie set. It also is said to be haunted by the mysterious figure of a young woman. Workers who clean the tubes at night have reported seeing her moving along the tracks at Aldwych, allegedly frightening some of the workers enough that they refused to come back.

A television crew, recording for the programme Most Haunted claimed to have seen someone moving in the tunnels. However, they claimed to have seen this movement just at the limits of their lights (where their cameras couldn't film - convenient or inconvenient? I leave that for you to decide). Also, the show Most Haunted...how does one say this? It doesn't exactly have a reputation for honesty. I recommend reading the book Will Storr vs. The Supernatural for a great behind-the-scenes description of the show. 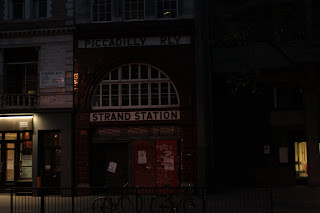 Exterior of Station in May 2010

Commentary: I am preparing to go on vacation soon, and will be taking my girlfriend to London, provided that Iceland will finish exploding and let the rest of us get on with our air travel. As such, I thought it appropriate to look up some London ghost stories. Interestingly, the first one that I came across through Google has something in common with the last story I posted about my home town, but I'll get to that in a bit.

Aldwych station was opened in 1907 as part of the Piccadilly line of the London subway system (aka "The Underground" or "The Tube", not to be confused with the band the Tubes). The Piccadilly line was nick-named the Theatre Line because of its proximity to many of London's theatres. As noted above, Aldwych station itself is built on the location of the Royal Strand theatre.

The name Aldwych is derived from the Old English words meaning "old settlement", and is the location of the 7th-century Anglo-Saxon village of Lundenwic (meaning London Settlement), located about a mile away from Londinium (the originally Roman settlement that would grow into the city of London).

In the online sources that to which I have access, the ghost is always said to be the spirit of an actress, but no reason is ever given for assuming that it is an actress other than that the station is at the location of the old theatre. However, prior to this, it was also the site of an art gallery, and then a non-conformist (Protestant but not Church of England) chapel. So, in the absence of any other identifying information, why claim that the ghost belongs to an actress and not someone associated with the art gallery (the doomed lover of a painter, perhaps?) or the church (a jilted bride left at the church's alter who died of a broken heart?) or the station (someone who failed to mind the gap?)? For that matter, why couldn't the ghost be associated with Lundenwic? The only reason that she seems to be routinely identified as an actress is because of tradition and the theatre location.

As for the similarity with the story of Acacia cemetery, it is simply this. With one exception, every website that I have come across that describes the Aldwych ghost uses the exact same phrase: "The ghost is that of an actress who believes she has not enjoyed her last curtain call." Admittedly, it's not a bad line, but it gets redundant after a very short while. Why does it constantly show up? Perhaps because webmasters and content providers are woefully unimaginative. More likely because we are lazy, and cutting-and-pasting is easier than writing a new sentence. But it makes me wonder: when I arrive in London, will I hear different stories about the ghost, that perhaps she is something other than an actress? Is the actress story spread merely because it's easy to cut-and-paste a semi-decent line than to write something new? And, given the prevalence of the internet amongst ghost story enthusiasts, is it possible that one version of the story, complete with the "curtain call" line, may become the standard.

If you're interested, silly photos of the station can be found here.