Some time around 1840, Jacob Cooley, of Frankfort Kentucky, was expecting his first child. His wife was pregnant, and Jacob had to make sure that his child had all needed items, including a chest of drawers for their bedroom. To this end, he ordered one of his slaves, a furniture-maker named Hosea, to build the chest. 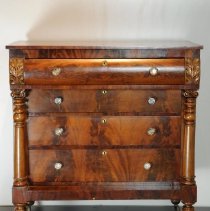 Though most people would hold that the chest was well built and quite beautiful, Cooley disliked it, and in a fit of rage, beat Hosea to death.

The other slaves saw this as a move too far by the master, and they saw the need to address it. Among the slaves was a conjure man, who told the others what to do: they snuck the chest out of the house, and brought it to the conjure man's cabin. He lead them in a chanted incantation, while sprinkling owl's blood into one of the chest's drawers. The chest was, thus, cursed.

For reasons unclear, but possibly due to the curse itself, Cooley decided to make use of the chest despite his dislike of it, and placed it in his son't room. His son died a few days after birth.

From there, a number of people are said to have died after storing their goods in the chest. Rather than type out a blow-by-blow, I am going to copy from the Kentucky Historical Society:


1.The baby clothes of the child for whom the chest was made were put in the chest: he died in infancy

2.One of Jacob Cooley's older sons used it for his son: he was stabbed on his 25th birthday by his body servant

3.The chest was moved to the attic but was later given to a newly married couple Melinda and Sean: Melinda got sick and died

4.Sean was killed in an accident

5.Their daughter Evelyn and her husband cared for an orphan, Arabella, and later her wedding dress was put in the chest: her husband died young

6.The baby clothes of Arabella's child were put in the chest: the child died

7.Evelyn's oldest son married and the wedding clothes of his bride were put in the chest: the young woman died

8.Evelyn's servant, "Aunt Sarah," hid gloves and a scarf she knitted as a Christmas gift for her son in the chest: he fell through a train trestle two days before Christmas and was killed

9.Evelyn's daughter, Norah's wedding clothes were put in the chest: her husband deserted her

10.Evelyn's daughter, Ruthie, put her childhood clothes in the chest: she was injured & died a cripple

11.Evelyn, distressed by loss, took her own life

12.The chest was brought to the house of Virginia Cary Hudson (the storyteller). The clothes of Virginia's first child went into the chest: the baby died

13.The clothes of Virginia's daughter were put in the chest: she was stricken with infantile paralysis

14.The wedding clothes of another of Virginia's daughters were put in the chest: her husband died

15.Virginia's son Stanley put his hunting clothes into the chest: he was shot

16.Virginia's son Robbie put his clothes in the chest: he was stabbed through his hand at school

In other words, worries about what you were storing items in didn't begin with people freaking out over chemicals in Tupperware.

In the end, a descendant of Jacob Cooley inherited the chest, and consulted a conjure woman named Annie, who informed her that the following conditions would have to be met for the curse to be lifted (stealing from Fairweather Lewis's blog):


. . .someone would have to give Mrs. Hudson, unprompted, a stuffed dead owl.

. . .a pot filled with leaves from a willow tree would have to be boiled from sunrise to sunset, with the owl sitting nearby.

. . .and then, the likker [fluid containing chemicals from the plant] off the boiled willow would have to be poured into a jug and the jug buried under a flowering bush, with the jug’s handle facing east, toward the morning sun.

The original source for this story appears to be a book of short stories and reminiscences titled Flapdoodle, Trust, and Obey by Virginia Hudson, a descendant of Cooley.


*I do not know what the cataloging system is for the Kentucky Historical Society, so it may well have been donated in 1976. But the catalogue number would indicate a 1980 donation in the systems that I have used. Again, though, they may be using a system that I am not familiar with, and the number may indicate different information than it looks like to me.

Commentary: Before I get into the things that I think are interesting here, I would like to make a quick point. Many of the images you see online for this show a chest, not a chest of drawers. A chest of drawers is an antiquated term for what we would typically call a dresser now. The image above is an image from the Kentucky Historical society, a photo of the item discussed here. So, that is what it looks like.

There are many ways for this story to be read. One is simply as the modern story, shared among those of us for whom American chattels slavery is a thing long gone, where this can be seen by many as nothing more than a creepy story.

Another way to read it is as a story about the anxieties of people whose position in society is dependent on keeping others in a subservient position. In this reading, the slaves are not weak and have the potential to lash out if provoked, thus both justifying pushing the lower classes of a society away from any source of power and influence, as well as acting as a cautionary tale about how far the subservient classes may be pushed without reprisal. These two contradictory meanings - we must keep people down, but don't try to hard keeping them down or you will get a backlash - can be found in stories touching on slavery from Rome to the American South, and the themes continue to be read in stories from people who have opposed the labor movement of the 20th century and who fear migrant laborers in the U.S. and Europe today. In this way, this can be seen as a mirror image of the stories from African about Zombie Trains.

Another reading is that this is a story that speaks to a sense of collective guilt among many white Americans where we see slavery as an evil, and one from which we still benefit even a century and a half after it ended (whether we will admit it or not). In such a story, we can place the guilt for the institution on individuals of the past, such as Jacob Cooley, and use this story to make Cooley symbolically pay for this original sin of American society. If you think that sounds like too much, I will simply remind you that these sorts of symbolic sacrifices are the bases of many religions (and keep in mind that the story was first introduced to the world in a book written by Virginia Hudson, in which she claimed to want to put forward her Christian religious views, and symbolic sacrifice is central to Christianity, meaning that there would likely have been some resonance there). It's a common way that humans have processed our feelings about guilt and the need for past crimes and violence to be paid for. In this case, in casting Cooley as a horrible man and not a benevolent one, as is often done in religion, it also lets us put a distance (whether real or fictional) between us and the people who perpetuated slavery - "this man was a vile murder, nothing like me, if I were born into that society, I wouldn't have been a slave owner, clearly, because I'm not that kind of person! I'd never beat someone to death!" It's a way to ignore that these people were as human as us, and were we born into the pre-Civil War, we likely would have been very much like Cooley. The story allows us not only to sacrifice Mr. Cooley (or, rather, his family) for the sins that we benefit from, it also allows us to dehumanize him and pretend that the differences between us and him are due to something other than the circumstances of where and when we were born.

Another reading is that of a resistance narrative. The slaves are subservient, downtrodden, and literally made the property of others, but they are not powerless. They have access to magic and supernatural power that is not available to the white masters. They may be in a low place, but they won't remain there, and when pushed, they have means to push back that the masters cannot understand or protect against. Again, such stories are not uncommon throughout human history, and can serve as a comfort for people in an underclass, even when the stories are about another time and place.

There are, no doubt, many other ways you can read this, and none of these readings are mutually exclusive. They are all available simultaneously, and new readings are likely to be created as needed, as is common with folklore.

One final note - the curse began with a white slave owner beating his slave to death, and then ends with an unrelated black woman descended from slaves dying as the curse's final victim. I don't know what to make of that, but it seems...unsavory to me.