A "close" is a narrow street, usually surrounded by high buildings. Mary King's Close, in Scotland, was one such street, surrounded by tenement houses, and once the main shopping street in the city of Edinburgh. The street is said to be named after Mary King, who owned a stall selling items such as lace goods, but this story is probably apocryphal. Being a medieval street, sanitation was poor, with the contents of night soil buckets and bedpans being emptied into the street in the mornings, and being a narrow street, quarters were tight. Although the bubonic plague was the most virulent disease to spread through this region, it's a fair bet that diseases such as cholera and dysentery claimed more than a few lives. 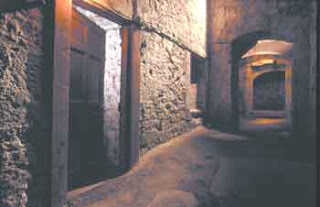 It is said that in the mid-17th century, when the bubonic plague was laying waste to Edinburgh, Mary King's Close was sealed up in order to stop the plague-ridden from getting out. The story goes that, after a year, the close was re-opened and over 600 bodies pulled out, cut up by the local butchers, and disposed of in a mass grave (but see the commentary below).

In the 19th century, a new City Chambers was constructed in this area, using lower levels of the original buildings as foundations. The result was that Mary King's Close literally went underground, buried beneath the new buildings, but still accessible. The close, as well as other connected closes, was were shut off from the public and not accessible for much of the 20th century, but was re-opened again early this century. Now, guided tours are available, and both ghost story enthusiasts and history buffs go both to see a place that is both creepy, and a well-preserved example of a 17th century street.

Mary King's Close has since gained a reputation for being one of the most haunted places in Scotland. People report seeing shadowy figures, strange smells, and noises with no apparent source. Other sightings include the apparitions of people walking through the close and, interestingly, headless animals.

One particular spirit said to haunt the close is that of a 10-year old girl named Annie. She is said to inhabit one room within a house on the close, and those visiting the room report feeling her presence, hearing her voice, or in some cases even seeing her. Visitors often leave toys and candies in the room as offerings to Annie. 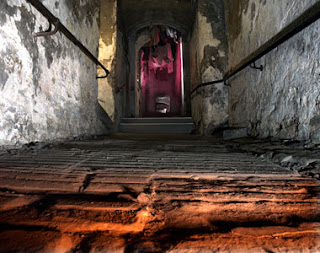 Rumor holds that the ceilings in some of the rooms are made of the ash remains of plague victims - this sounds like B.S. to me, but I will look into it to see if I can find any confirming evidence. Until such time as I can find any information, I would assume that this isn't true.

One family is said to have had a larger amount of trouble than others with the ghosts of the close, and that is the Colthearts, who lived in the Close during the 17th century.

Legend holds that the Colthearts, having decided that the tales of hauntings were nonsense, moved in to the Close and set up their home. Mr. Coltheart was a legal advisor, and the location provided some benefits for him. One night, while reading to her husband (who was sick - raise your hand if you think that it might have had something to do with the raw sewage in the streets), Mrs. Coltheart looked up to see the disembodies head of a scraggly-haired old man staring at her. Mrs. Coltheart fainted, in the manner of all good 17th century middle-close stereotypes.

Some days later, Mr. Coltheart saw it as well, although there is no word as to whether or not he fainted. And after that, Mr. Coltheart was awakened by the spectral head at night. After waking up his wife (no doubt while saying that 17th century equivalent of "dude, check it out!"), he lit a candle and began to pray. This didn't do much good, because not only did the head not vanish, but a second one, this of a child, appeared, as did a disembodied arm (because the heads really needed a hand*). After a time, the various body parts vanished, accompanied by a load groaning noise.

*Thank you, I'll be here all week, tip your waitresses!


Commentary: This is a near-perfect ghost story. A buried street, ghosts from pestilence, and a city so afraid of plague that it sealed some of its own inhabitants away and let them die slowly and painfully (add to this that it is often mentioned that the doomed were primarily Catholics). The street is haunted, and the spirit of an innocent child is trapped in the dark amongst more sinister spirits.

When you hear a ghost story so perfect, you have reason to suspect that there is something more going on than simply a scary story. To get at that, we have to get into the actual history of Mary King's Close.

The common story holds that Mary Kings Close was especially hard hit by plague, and that it was bricked off, trapping the inhabitants inside and letting them die horribly, in order to stop the spread of the plague. The truth is that the close was never bricked up, and there is no verifiable information that indicates that it was any harder hit by the plague than any other part of Edinburgh. It died, slowly, as the economic and social realities of Edinburgh changed during the 18th and 19th centuries. Some limited access and use was still allowed as late as the early 20th century.

The close went underground quite literally in the first half of the 19th century, when city government buildings were constructed over it, using the lower levels of the local buildings as foundations. This resulted both in making the place rather eerie, and in effectively removing is from view as a normal street. It is likely that the stories of the haunting of the close began, or at least became particularly popular, around this time. The inclusion of details regarding the bricking up of people and the poor treatment of their remains may come from the class system, and corresponding class animosity, that was prominent in 19th century Europe.

Since the end of the 20th century, the close has become a tourist attraction, with much of the focus of the advertising campaign on the ghost stories. Although much is made about the historical and archaeological research done on the area, this seems to come second to the money-making power of supernatural tourism.

I would provide a bit more discussion of my own, but I think that The BS Historian pretty much hits the nail on the head:

So I think what we have here is an interesting survival of a piece of folklore – the original ghost story was an emotionally powerful way of retelling the old myth that the mysterious mostly-abandoned Close was a) the result of the authorities’ disdain for common people and b) haunted as a result. And the MKC attraction perpetuates it despite the fact that their tours were designed specifically to debunk the myths of the Close, and even cites that research to enhance the “truthiness” of the story. As a money-making (though not for profit) company, it’s easy to see why they would retain such a great piece of marketing. Sex may sell, but so do ghosts! Even my misinformed tour guide later made noises to the effect that the Annie story’s veracity didn’t really matter – it was just an exemplar for the sort of short, brutish, poverty and disease-ridden lives that a majority of people in Edinburgh/Scotland’s history have suffered. And a way to raise money (see also here) for ill young children at an Edinburgh hospital. Needless to say, it also maintains the attraction of the place to a wider range of visitor types and therefore helps keep the funds coming in. Periodic ghost “sightings” and other press and media work must help keep heads above water too. But do these ends justify the means? Does misrepresenting facts of history and of science justify the money it brings in? Are we content to prostitute unique pieces of built and cultural heritage in order to help keep them going? I suspect the answer is “yes”, but we don’t all have to like it, and we should try for better.