At Devil's Gate Gorge in Arroyo Seco there sits a large rock outcrop that many believe is shaped like Satan's head, hence the name of the location. Factual information about the location's history is hard to come by, having been buried in tall tales and folklore, and these have, in turn, influenced much of what people say and have written about it in the tight circle of fact and nonsense that is human collective memory.

Holy crap, I read what I just wrote and realize that I have been listening to a lot of Aaron Mehnke's podcast* lately.

Regardless, what become common belief tends to color what people wish to write about and tends to change stories that we hold to be true of older stories. So, keep in mind that, especially when talking about Tongva beliefs below, there is a fair chance that the story is more nonsense than sense. But it's entertaining nonsense, and in the end, isn't that the highest form of truth?  The answer is no.

Okay, I promise that I have all of that out of my system now.

As noted above, the rock formation, from one angle, looks like a devil's head.  See what you think: 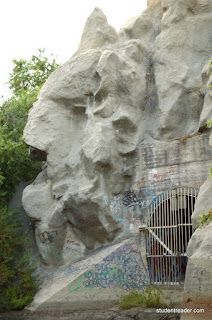 Local stories holds that the sounds of the river moving through the gorge sounds like laughing, which was allegedly thought by members of the local Tongva ethnolinguistic group to be the culture hero Coyote laughing**. Some telling shold that the Tongva felt that the location was supernaturally powerful and to be avoided, and others that it was the gateway to the afterlife and therefore to be shunned by the living. I am skeptical of the claim that the Tongva had these story, especially the variations about avoiding the location - this sort of embellishment is often added to ghost stories to make them seem more authentic, but is almost always false.

In 1920, the gorge was dammed to create a reservoir and control flooding in the Los Angeles river system. However, the Devil's Head remained above water and continues to be visible

As time went on, the place began to collect other stories, the most entertaining of which involve Alastair Crowley, L. Ron Hubbard, and their friend, Jet Propulsion Laboratory c-founder and scientist and all around really weird guy, Jack Parsons.  According to the story, Ol' Al , Ron, and Jack were convinced that the Devil's Gate Gorge was a gateway to Hell (one of specifically seven) and full of all manner of supernatural power. Some folks have claimed that the location of the Jet Propulsion laboratory was intended to use power from the Devil's Gate, and is tied in to the various occult movement that have become popular in Los Angeles and Hollywood during the 20th century. While these stories tend to breakdown into incoherency pretty quickly, they are fun to hear and tell.

Among the stories are claims that Hubbard and Parsons too part in rituals at the gorge with the intention of tapping into the Hell gate's energy, possibly to create a Moon Child, a being that would embody a feminine divine force. Parsons and Hubbard did, in fact, engage in rituals for this purpose in 1946, though whether they did anything at Devils Gorge is not reported anywhere.

In the 1950s, a series of children went missing in the area, including 13-year-old Donald Lee Baker and 11-year old Brenda Howell in 1956, and 8 year-old Tommy Bowman in 1957 and 6-year-old Bruce Kremen in 1960. Bruce Kremen is especially baffling, as the boy was attending a YMCA camp, and left the counselors to walk 300 yards back to the camp lodging, only to vanish. The 1956 disappearances were explained years later when serial killer Mack Ray Edwards was caught. The later disappearances are still unsolved, and may have been tied in to Edwards, or may be due to some other cause. Regardless, they have added to the grisly history of the area.

Modern L.A.-area ghost hunters like too claim that these rituals opened the gate, allowing evil entities into our world. And they flock to the location hunting for these entities (I wonder what the OSHA requirements for protective equipment are? A Mojo hand? a gris-gris bag?).  Stories for the location include the (disappointedly mundane given the history above) usual orbs in photos and phantom voices. In one case, someone did report hearing singing coming from the metal gate shown in the picture above, and seeing red eyes peering from the back of the tunnel.

The folks at Offbeat L.A. provided a short and enjoyable description of the area, though they refer to mysterious wood structures that, to this individual who deals with utilities, look exactly like transmission line structures, so, you know, grain of salt and all.


*Which, if you haven't been listening to it, I have to ask, what is wrong with you? If you like the sordid tales that I post here, Aaron Mehnke's providing you the stronger stuff, and in excellent, if sometimes very wordy, format.

** I am not a specialist in Tongva mythology, but I am a professional archaeologist and anthropologist that works in California, and this explanation of allegedly local Native American belief sounds to me more like a 20th-century white-person claim than an actual part of the local Native Folklore, but, again, as I am not an expert on the stories of this particular region (my graduate research was performed farther north in the Santa Barbara area, and my professional life has been primarily in the San Joaquin Valley and Sierra Nevadas), I may be wrong and it is possible that this place was forbidden in the Tongva belief system. Incidentally, as I refer to utility companies later in this entry, I am an archaeologist employed currently by a utility company to help them comply with federal and state cultural resources laws - so I help protect archaeological sites, historic buildings, and spots important to Native Americans - yep, it's an actual job with a good career path and decent pay, so if you decide to get a Masters degree in archaeology, yes you can actually have a good job, no matter what all of those condescending assholes will imply.


Commentary: Naturally, the ghost hunters who visit the area are looking for the "norm" of our time - orbs, cold spots, and the like. Which is disappointing given the allegedly deep supernatural meaning of this place. I have to admit that, in reading LA Ghost Portal's write-up, I was a put off by their description of trying to reach out to the spirits of missing and dead children. That just seemed really tasteless to me. On the other hand, I included them in my description here, so perhaps I am guilty of the same tastelessness.


What I like about this story is the way that it weaves numerous different strands present in other ghost stories together. Appeals to Los Angeles supposed hedonism?  Check! Reference to a cult? Check, and bonus (both Crowley's temple and Scientology make an appearance!)! Reference to dark rituals?  Check! Reference to Native American sacred sites?  Check! Turning the mundane (a gate) into something creepy?  Check!

The story is, undoubtedly, mostly bullshit, though, wonderfully, the one element that might be true is the most outlandish - while I can't confirm that Parsons and Hubbard ever engaged in rituals at the Devils Gate, it would not have been any weirder than things that these two were confirmed to have gotten up to around that point in time.