I usually don't include stories sent in to podcasts, but this one was too creepy to ignore.

A fellow named Archer, who lives in Georgia, sent an MP3 containing this story into the Anything Ghost podcast...

Archer had bought a white noise machine to help him sleep. You've probably seen these machines before, they produce various different sounds - rain, a flowing creek, etc. - to act as background noise, and cancel out other noises that may interfere with a person's sleep. Archer liked the creek setting, and would turn it on as he went to bed.

One night, a friend of Archer's was visiting from out of town. The next morning, he asked Archer about the talking machine that had been on all night. Archer explained that it was not a "talking machine" but a white noise machine, and that it had been playing the sound of a flowing creek. His friend insisted that he heard it speaking, though he couldn't understand the words, but Archer heard no such thing and figured that his friend was joking.

Later, another friend came to visit, and reported the same thing. After this visit, Archer decided to try turning the machine on and visiting different bedrooms in his home to see if there was something about the acoustics of the place that would cause the machine's noises to sound like speech. He found nothing, and just thought it was odd, without giving it much more thought.

A short time later, Archer went on a trip to another city. He brought the white noise machine with him, and turned it on when he was ready to go to sleep. This time, though, he didn't just hear the flowing creek, but rather the strange voice, and it was screaming in a deep, angry tone. While the screaming occurred, a hot wind began to blow through the hotel room. Archer hit the power button numerous times, but to no avail. He finally unplugged the unit from the wall, causing the sound to stop and the wind to stop blowing in the room.

He threw away the machine and has stated that he hasn't bought a replacement.


Commentary: So, this is the second "haunted object" that I have written about here. This is also an interesting one in that, given that it apparently hosted an angry spirit, it could also fall into the "demons" category, and might be thought of as a possessed object.

Unlike some of the other stories on this blog, my interest in this story comes not from an intellectual interest in the structure or elements of the story, but simply from the fact that it is a damn effective scary story. I have told the story to, or played the podcast for, several people, and all of them have been suitably creeped out by it.

I discovered the hard way that telling this story to your girlfriend late at night is a good way to get her both unnerved and angry with you. Thankfully, I have also discovered that this can be neutralized to a degree by suggesting that she imagine that, rather than a deep demonic voice emanating from the machine, the voice of Bill Cosby telling a rambling anecdote that goes nowhere is coming from the machine. Really, it's hard to be frightened when you imagine that the eternal damned babble incoherently about Jello pudding through a set of cheap speakers.

It's worth noting that devices that produce white noise, including white noise generators, but also including items such as electric fans or televisions and radios set to static, as well as devices that simply produce other types of random noise, can be thought to produce speech because of a phenomenon known as pareidolia - the tendency for the brain to perceive distinct patterns even when there is only randomness, in this case to hear voices or language where none actually is. This is likely the phenomenon behind most electronic voice phenomenon and the claimed backward messages on rock albums* as well as the tendency for people to see things such as religious figures in burn marks or alien spaceships in cloud formations.

But, of course, that wouldn't explain a machine screaming at the owner. Whether this is a case of something strange actually happening to Archer, or a case of someone simply wanting to tell a scary story to an audience via a podcast, I haven't a clue. But it makes for a damn good ghost story.

For more on how paradolia can cause us to hear things that aren't there, check out these two podcasts: this one and this one

There is a curious artifact sitting in the British Museum in London: a skull carved of rock crystal (a clear and colorless variety of quartz) that is purported to be from an Aztec site in Mexico. The skull was bought by the British museum in 1897 from Tiffany and Co., New York, who had bought it from French antiquities collector Eugene Boban, who in turn claimed to have bought it from an english collector who had bought it from a Spanish officer who had served in Mexico in the 1850s and 1860s. Like other similar crystal skulls, people claim that the British Museums Aztec Skull gives off energy and likely has psychic powers or properties, and may have healing powers. None of this makes it appropriate to a ghost story blog, though.

What does, however, make the Aztec Skull appropriate to a ghost story blog is the fact that it is claimed to move on its own, that museum personel allegedly insist that the skull be covered when the museum is closed because it freaks them out otherwise, and that various odd sounds and eerie feelings are tied to the skull. In other words, leaving aside the baggage that comes with it being a mystical crystal skull, it's also a haunted object.

If you look up "aztec skull british museum" via Google, you'll find all manner of web sites that, in addition to promoting the usual stories associated with crystals skulls (claims of ties to Atlantis, or aliens; claims of healing power; claims of magical properties) also tell of vague but eerie stories concerning this particular skull. These stories are consistent with what people describe when talking about haunted houses: the skull allegedly moves on its own, sometimes when nobody is looking and sometimes when someone is watching it through the glass of its display case. Nobody has ever caught this on film or video, but the stories persist. It is also claimed that museum employees insist that the skull be covered at night, when the museum is closed, in order to not see it move and to stave off creepy feelings often associated with it, though getting confirmation of this claim from the British Museum seems impossible. Also, it is claimed that museum employees, working after closing, report symptoms typical of those in haunted houses - feelings of being watched, unexplained sounds, sudden fear or general creepiness - when working in the vicinity of the skull.

Although the skulls are usually viewed as either odd baggage of the New Age movement's crystal power claims, or as elaborate hoaxes, the Aztec Skull, sitting in its display case at the British Museum, should be viewed as an object of interest for ghost story enthusiasts. photo from the British Museum

Commentary: The story of the Aztec Skull is fascinating in and of itself. Bought by the museum in the late 19th century and documented as coming from a well-known French antiquities collector, the skull was thought to be a pre-Columbian artifact from the Americas. As time went on and more crystal skulls came to light, archaeologists and socio-cultural anthropologigists began to get suspicious.

Many of the cultures of Central and South America did manufacture carved skulls out of locally available stones. People living in the Americas during the 19th century discovered that European and North American museums were hungry for pre-Columbian artifacts, and would also carve many new ones, possibly including small skulls, out of whatever materials were at hand (sometimes including authentic, but less beautiful, ancient stone artifacts). These skulls were usually highly stylized in keeping with local traditions, however, and were quite different from the style of the crystal skulls of modern fortean lore.

The crystal skull craze began to pick up when Anna Mitchell-Hedges, daughter of adventurer and shameless self-promoter and teller of tall tales F. A. Mitchell-Hedges, produced a skull that she claimed to have found at an archaeological site in Belize while working with her father. The skull was mentioned very briefly in F.A. Mitchel-Hedge's 1954 autobiography, but it dodn't become well known until the late 1960s, when Anna began to tour it for profit. It, along with other crystal skulls that began to be better known, increased in public attention and popularity throughout the 1970s as a result of the New Age movement's belief in the alleged powers of crystals.

Many of the crystal skulls, including the Aztec skull, have been subjected to tests by numerous research institutions. The popular narrative holds that these tests have routinely shown that the skulls don't have toolmarks, that they are carved in such a way that would have been impossible without destroying the crystal, etc. etc. 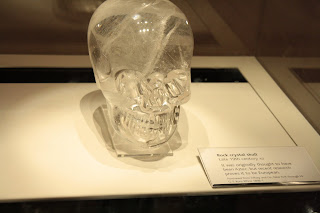 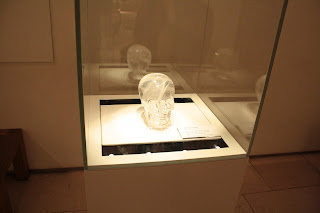 Photos of the skull on display, taken May 2010


The truth is rather different. The tests have consistently shown that the skulls do have tool marks, and that these tool marks are consistent with European crystal-carving tools dating from the late 19th century through the modern day. Some folks claim that different researchers have performed tests on crystal skulls but are refusing to release the results or acknowledge that the tests have been done - which is usually code for "this is all nonsense, but we have to say something unfalsifiable as a way of saving face". In other words, the crystal skulls are fakes. Several, including the Aztec Skull and the Mitchell-Hedges skull, appear to have come from Eugene Boban, who probably bought them in Oberstein, Germany, where such crystal work was routinely done in the late 19th century. The others either are not submitted for proper study or have revealed similar results. 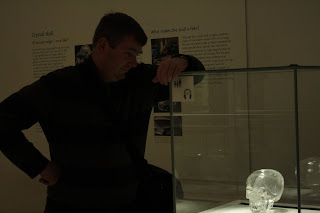 Me, looking dissaprovingly towards the Aztec Skull


Okay, so much for the legend of the crystal skulls. what about the Aztec Skull as a haunted object? Well, that's more interesting.

As said above, most of the symptoms of the skull's haunting are typical of haunted house symptoms - something with which Lononders would be very familiar. If I have to venture a guess, I'd say that, as the crystal skulls became the manifestation of the creepy side of the crystal power craze, the Britons working at the museum began to attribute the same sorts of symtpoms to the skull.

One thing that is missing, though, is the true and detailed history of the Aztec Skull. Yes, it was probably bought in Olberstein by Boban, but were there any interesting stories involved in its creation or existence prior to purchase? Probably not, but a ghost story collector wants to know.

Note: the skull is on display in the museum, but is hidden away in a corner, hard to find without help. If you'd like to see it, ask museum personnel to direct you towards it.