Haunted Lake (AKA The Pond outside of Francestown, NH)

Near Francestown, New Hampshire, there is a pond or small lake, known both as Scoby Pond (after David Scoby, who built a grist mill in the area) and by the more evocative name of Haunted Lake. 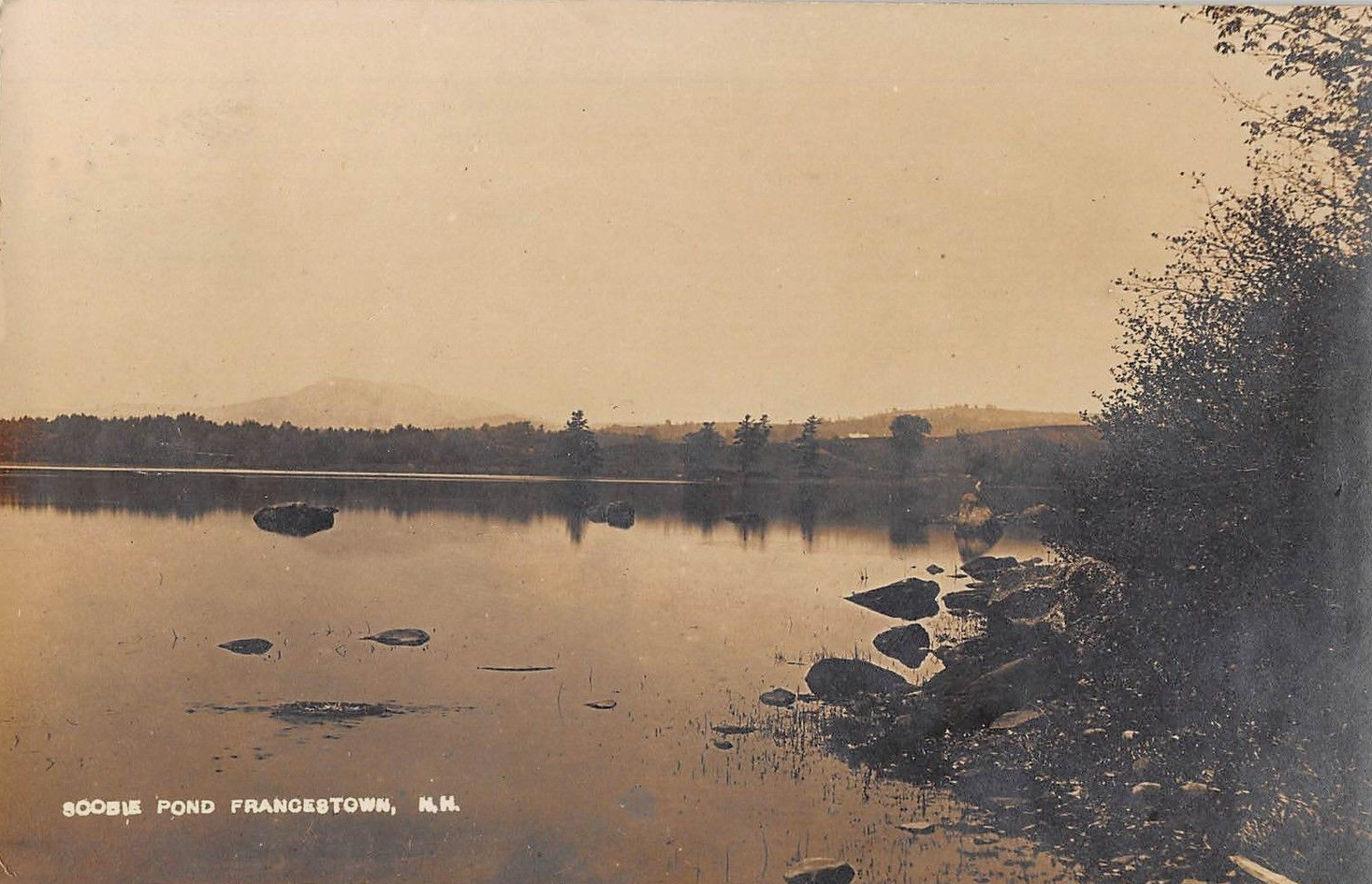 Image from old postcard of Scoby (AKA Scobie) Pond

The pond is, despite it's moniker, a rather picturesque place (rather like a place I worked once, a remote and quite beautiful lake with the dreadful name of Hell Hole Reservoir, but that is a story for another time). There are a number of explanations as to how the pond came to be named Haunted Lake, and the one that is, unfortunately, most likely true is that a fire burned the area at some point prior to 1753 (when the diary of Matthew Patten refers to it as Haunted Lake) and the burned-out and skeletal-looking remains of trees suggested to the settlers that the place had an eerie and otherworldy nature.

However, there are other possible origins for the name (and for these, go to the link for the History of Francestown below and start on Page 432).

One story holds that the children (and likely grandchildren) of David Scoby made tremendous sport out of running about in the dark to frighten people (described delightfully in the history as "Liquor-Laden Loafers") by pretending to be spirits and monsters. Given that a similar thing seems to be the origin of ghost stories at California's Rispin Mansion, I have to admit to a fondness for this explanation. That said, the "Scoby Boys" weren't active until the 1780s at the earliest, and, as noted above, the lake was referred to as "Haunted Lake" by 1753, so while this may have kept the name going, the name likely inspired the Scobys and was probably not inspired by their antics.

Another story says that two travelers bought land in the area, and in the 1740s, travelled to the area, starting out separately but eventually meeting and traveling together. One night, while camping near, or on the shore of, the pond, they fought, and one killed the other. The murders gave the victim a half-hearted burial and left the body. When Matthew Patten (a land surveyor) was sent out to perform surveys of the area, he and his chain men (people who assisted the surveyor by using chains that helped to measure distance) camped on the shore of the lake, and heard groaning and shrieking, as if from a man in desperate pain. The work crew, despite Pattens' efforts, left for Bedford the next day without completing the survey.

Yet another story holds that Davis Scoby found a skeleton of a large, but young, man while preparing the land for his mill. It is not specifically said that there are any haunting elements associated with this discovery, but that would seem appropriate for the lake's name.

Finally, one more story: Two hunters set out to hunt and trap near the lake. They would camp together at night, but head out in different directions during the day. One evening, one of the campers failed to return to camp. When the other camper went out to find him the next day, he discovered that his companion had been killed by one of the animals that prowled the area. The surviving hunter headed back for the

The odd thing is that, aside from the lake's name, and the 18th century reference to the sounds of pained shrieks and moans, there is little to indicate that anyone has had weird experiences out here. This is disappointing, but there you go.

That said, there is a lengthy list of deaths that occurred (or, at least, are said to have occurred) at the lake up through the late 19th century. None of them are said to be supernatural, but it will still make you feel somewhat creeped out.

Commentary:  This is a fun one. Most likely, the name haunted lake is due either to an eerie post-fire appearance, as noted above, or to bits of local folklore with little basis in reality. It's just the way that these things tend to go. But, that said, every community needs its local haunted property, and given that it is filled with water and typically literally opaque to humans, a lake makes for a good one.

There really isn't too much to say about the story itself, but I would like to discuss something having to do with two of the sources that, given what I do as my day job, I find interesting. The first is the diary of Matthew Patten - diaries such as these were kept by many people in the 18th and 19th centuries, and most were lost, a few found there way into special collections, and a few of those were published. These are often used by researchers who have to do historic research, and I found myself often consulting my copy of a similar diary, though this of a sailor, called Three Years Before the Mast when working on my masters thesis (this contained discussions of early Santa Barbara, California, and as my masters thesis looked, in part, at the archaeology of culture contact, this was a useful resource).

The second thing that is interesting is the late 19th century town history of Francestown. Books like this were common in the late 19th and early 20th century, and for people doing any sort of historical research, or research into local folklore, these are gold mines. I often use these when writing historic contexts for my day job, and have found them consistently useful. Plus, it's fun to find out what all of the various places names in your town actually mean.