The Dark Watchers of the Santa Lucia Mountains

The Santa Lucia Mountains dominate central California's Coast from San Luis Obispo to Monterey. I can say from experience that the mountains are generally pleasant, providing both beautiful scenery and a quiet place to retreat from life's demands. However, legend holds that they are also haunted by strange, pitch-black specters that appear at a distance and seem to watch those who wander into the mountains or sometimes simply stare off into the distance. Their nature and purpose is unknown, but they have long been reported by people venturing into the mountains. The story is the same - someone will be climbing a slope or hiking a trail or beating a path through thick vegetation, and look up only to see a large, human-like figure garbed in a black hat and black robes, with no skin showing, looking down at them or else slowly surveying the area. If the witness moves to approach the figure, or tries to call the attention of others to it, it vanishes. 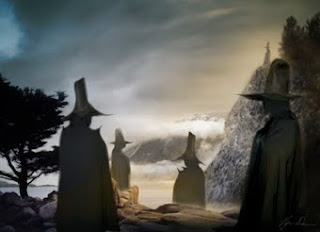 These specters, known as the Dark Watchers, are well known in local folklore, and even appear in John Steibeck's short story Flight and Robinson Jeffer's poem "Such Counsel You Gave to Me." It has been claimed that the Chumash who lived in the southern portions of the mountains, down around San Luis Obispo, have stories about these beings that date to before European contact with the area. They certainly were a well-known phenomenon by the 1930s, when Steinbeck and Jeffers were writing.

Commentary: This type of story is the reason why I love ghost stories as much as I do. While there's nothing bad reported to have happened to the people who have witnessed the Dark Watchers, they nonetheless are sinister, creepy, and just generally oogie. Just imagining seeing one of these things as you're going for a walk in the woods is enough to send a chill down your spine.

Oh yeah, this is the good stuff.

As noted above, it is clear that the stories of the Dark Watchers were in circulation by the 1930s, but it is often said that the Chumash who lived San Luis Obispo county had old stories about them. This may be, but the compilations of Chumash stories that I am familiar with (and because of my job and my training, I am familiar with most of what has been written about the Chumash) do not include stories of the Dark Watchers or anything similar. On the one hand, it can not be expected that the ethnographers who were collecting stories managed to get everything, so that there are stories out there that have not been captured by anthropologists is a certainty. However, it is also a common tactic for people trying to make a claim seem legitimate to falsely claim that there were Native American stories concerning it. So, there may have been stories about the Dark Watchers amongst the Chumash (and the Salinan, who occupied much fo the rest of the Santa Lucia Mountains), but I will remain a bit skeptical of this claim until I see it from a reliable source and not simply posted on websites.

I am tempted to call this a variant of the shadow people stories that have become popular in recent decades. Certainly it bears many of the same traits, and is nearly identical in appearance. However, as the Dark Watchers pre-date the popular shadow people stories and have taken on a local cultural significance, so for reasons of talking folklore, I am going to treat them differently, even though they likely have the same explanations.

...and here's a short film about the Dark Watchers: