Singapore, a former British colony, was part of the Pacific Theatre during WWII. In February 1942, the British 1st Malaya Infantry Brigade retreated from Japanese forces, using Alexandra Military Hospital as an escape route. Machine guns were set up in the hospital to cover the retreat. A lieutenant sent under white flag to surrender all non-combatants was killed, and the hospital raided. Japanese soldiers reportedly killed 250 people, comprised of hospital patients and staff, and reportedly removed other patients and staff and lacked them in a bungalow, with some of them removed and shot the next day.

The Japanese soldiers claimed that Indian soldiers (the Malaya infantry had soldiers from Asia) had opened fire on them from the hospital grounds. Patients who had been left alive during the initial raid were reportedly left alone for 3 days without food or water, many of them dying.

Although it is tempting to use this episode to dismiss all Japanese soldiers as barbaric, it should be noted that similar things happened with other nationalities in other locations (indeed, some of the atrocities committed on both the Russian and German sides of the European eastern front made this hospital raid look downright tame). And the Japanese general in charge of operations, Tomoyuki Yamashita, was so shocked by the actions of his soldiers that he had the officer responsible and many soldiers executed for their role, and he personally went to apologize to the surviving patients, even making the point of personally opening food cans and feeding them.

Given this history, it's no surprise that the hospital has a reputation for being haunted. The haunting is said to take the form of creepy feelings, and some apparitions of people, presumably former patients, seen in the building. One person's account, posted on-line (ahhh, the illustrious internet) claims that the apparitions can interact with the living.

A man who claims to have psychic powers took his son to the hospital for a dental appointment, and claimed to have caught a photo of the ghost of a dead soldier looking out the window. 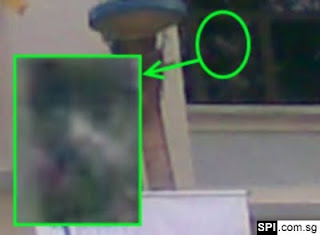 Photo claimed to contain an image of a dead soldier. It looks like a blotchy reflection to me. From spi.com.sg

Strangely, for a place that many English-language websites tout as one of the most haunted places in Singapore, there is little information regarding other hauntings.


Commentary: There are two things that I find interesting about this story. One is that many English-language websites have this hospital on lists of "Most Haunted Places in Singapore", and yet actual information regarding the symptoms of the haunting are scarce. The "Soldier Photo", a few message-board accounts of over-the-top ghost sightings, and frequent references to a "creepy feeling" are all that I was able to find. Now, Singapore has four official languages: English, Chinese, Tamil, and Malay, and if I could speak one of the other three (and some folks would say that I can't even manage English), then I might be able to find more information. But I can't, so there you go.

At any rate, this seems to be a case where many of the English-speaking, non-Singaporean ghost story enthusiasts, such as myself, chose this as a "most haunted place" not because it is clearly more haunted than anywhere else in Singapore, but because, due to the building's WII-era history, it's a place that seems like it should be haunted and it's more likely to be known to non-Asian history and trivia buffs than many other places in Singapore. So, it may be that it's simply the allegedly haunted place that English-speaking enthusiasts will have heard of, rather than being one that is deserving of a "most haunted" title.

However, if anyone can read stories written in other languages and can show me that there are more phenomenon said to occur at the hospital than I know of, I will be more than happy to revise this entry.

The second thing that I find interesting is a non-ghost (but nonetheless rather strange) story associated with this hospital. Every place that I have read about this hospital, there has been mention of a book that contained the names of all people killed during the massacre at the hospital. The book's whereabouts are currently unknown. I don't know why, but the missing book feels eerie to me, even though I don't know that it ever actually existed, and if it did, it's entirely possible that it was simply mis-placed.