In the town of Barstow, California, there is a delightful example of early 20th century architecture: The Harvey House/Casa de Desierto. 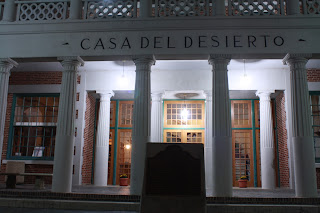 The Casa de Desierto (Desert House), one of the Harvey House chain of hotels and restaurants that once were common along the railroads, was built in 1911, to replace an earlier structure that had been destroyed in a fire. It is a rather beautiful building, standing next to the railroad tracks, and conspicuous, as the rest of Barstow's architecture, while quite pleasant and often gorgeous in its own right, tends to be more utilitarian than this former hotel.

Naturally, it is said to be haunted.

The most common experiences reported are, as is so often the case, vague feelings of uneasiness, "being watched," and the ubiquitous "cold spots."  More interesting are the apparitions that people report seeing, including Harvey Girls (travelling waitresses who worked for the Harvey company) who are seen walking the halls of the building (including one who appears to simply walk the same route from the kitchen to the dining room, with something in her hand, repeating the walk again and again), and a woman named Rachel who is seen on the balcony, depending on the telling, is either a Harvey Girl or a young woman waiting for her fiance or husband to return from the war (I assume WWI).  In the latter tellings, Rachel is said to have committed suicide - a common ghost story motif.

In addition to the apparitions, there are smells and sounds.  The smell of tobacco smoke is said to signify the presence of Buchanan, a man who was crushed between two rail cars and whose dying wishes were to see his family and to have a cigarette.  A little girl names Emily is said to occasionally laugh as people walk by, and her apparition plays "peek-a-boo" as people walk up the lobby stairs.

Commentary:  The Harvey Houses were an interesting institution - a chain of hotels linked by the railroads, known for their quality and comfort when these were rare during travel through the western United States.  People often claimed (no doubt with encouragement from the Harvey Company's marketing office) that the Harvey Houses "tamed the wild west."  This is, of course, not true.  However, they did provide amenities that might otherwise be scarce in the Great Basin and desert Southern California.

That this one has had ghost stories attached to it is unsurprising.  As noted above, the building really does stand out.  Barstow is located on Route 66, and has it's fair share of historic and unique buildings and rather friendly people - for all of it's sometimes bad reputation as a destination, I have always found Barstow to be a pleasant place when I have traveled there for work - but the Casa de Desierto stands apart from the rest.  It's a mix of east-coast brick, neo-classical, and Moorish designs that looks...well, the best word that I can think of is "classy."  It's a very nice building that looks very out of place next to the railroad tracks and a dry riverbed.

Given that it is both a conspicuous structure and that it has long been a landmark for those riding the trains as well as those living in Barstow, it is unsurprising that it has gathered ghost stories.  I must admit that I am a bit disappointed that the stories are so pedestrian.  The sightings of Emily are reminiscent of the sightings of another ghostly child at the Brookdale Lodge, but the stranger and more menacing apparitions at the Santa Cruz County hotel are missing in Barstow.

Still, what the stories at Casa de Desierto lack in originality, they make up for in colorfulness.  The smoke that calls to mind Buchanan's demise, the details regarding where Rachel will be standing (and the alternating versions of her reason for being there), and the fact that the stories are folded within the manufactured mythology of the Harvey Company make for an enjoyable set of tales.