The Brookdale Lodge is located on on Highway 9 in Brookdale (hence the name, amazing, isn't it?) in Santa Cruz County. In addition to a hotel, the lodge also boasts a beautiful restaurant known as the Brook Room, built on top of a natural creek - and the floor of the restaurant has been built so that the creek bed is visible running through the place.

I know that I have been spending too much time performing archaeological survey - I had to go through that last paragraph and replace the word "drainage" with "creek."

The lodge began as the headquarters of the local lumber company in the 1890’s. It passed through different owners, and was a hotel, resort, and currently is both a restaurant and hotel. During the 1920’s through 1940’s it was a hotspot resort and is known to the music world through three different swing-era songs, and known to the rest of the world as a popular vacation spot for the wealthy. Over time, the lodge feel into disrepute, but has been somewhat rehabilitated, and is today known as a local music spot, though no longer as a prime resort.

Local legend holds that mobsters from San Francisco would come to the Brookdale lodge when they wanted to lay low for a while or conduct their business in secret - after all, with the lodge as isolated as it is, law enforcement officials were supposedly rarely seen in the area. These stories are rather surprising, as from 1922 through 1945 the Brookdale Lodge was operated by a Seventh Day Adventist who adhered to prohibition, and was a wildly popular resort location. The period of infamy didn’t begin until the late 1940’s, but rumors of bodies buried under the floor and locations used for murders are a common part of local folklore.

Visitors to the hotel claim to have heard voices and also to have heard scratching along the exterior walls of the hotel - and it has been claimed that these are the actions of the ghosts of mobsters or their victims. Other, less ominous, voices and laughter are claimed to be the residue of the lodge’s good times as a resort. In addition, a previous owner of the lodge, H. J. Logan, had a young daughter named Sarah who fell into the creek in the Brook Room, was knocked unconscious, and drowned. Visitors report seeing and even talking to a girl who matches her description, but who vanishes mysteriously as soon as the person interacting with her looks away.

In the Mermaid Room, a room in which an entire wall is a thick sheet of glass that looks into the hotel's swimming pool, people have reported hearing voices, and clinking glasses, as if there is a spectral party taking place. And throughout the hotel, the sounds of slamming doors and footsteps in empty rooms have been reported.

Room 46 is reputed to be the most haunted location within the lodge. As put in a page on Montereybay.org's website:


In the 1970's a wing of motel rooms was built over the spot where once stood the lodge's camping cabins. Room 46 of the motel wing is reported to be very haunted. A woman who worked at the lodge in exchange for lodging has reported that at night objects and shapes would fly across the room. Ghostly ballroom dancers would swirl around leering at her as they floated by. Ghosts would materialize around her bed, their faces sometimes vague and sometimes very very clear. One of the ghosts was a little boy, perhaps 12 or 13 years old, another was a man with his eye hanging loose on his cheek, and still another was a man with a knife wound across his face. Not all of her experiences in room 46 were visual. She also reports that once she felt somebody sit on the edge of her bed and stroke her arm.

Commentary: Okay, a lot of stuff going on here.

First off, there’s the allure of the dark history of a once-popular and glamorous location. That alone would put this place into legend-land without the ghost story aspect. Likely much of the gangland-era story (bodies in the floorboards, murders carried out in a meatlocker to prevent the victim’s screams from being heard etc.) are exaggeration or fabrication. Nonetheless, it makes for a creepy story even if you don’t think the dead are returning.

The ghost stories have three elements – one is a typical scare story that involves voices from beyond reliving their terrifying final moments or, possibly, giving voice to their current terror due to their violent lives or end. The experiences described are typically vague and could be explained by a number of different non-ghostly sources. However, it does make for a good story to tell your date when you are winding your way up Highway 9 – in fact, I highly recommend doing so. Regardless, these stories are typical of places that have a reputation, deserved or not, for violence and shady characters. They are interesting both in the fact that we often turn perceived evil into entertainment, and also because they often reflect two different notions: 1) we assume that places where dirty deeds were done may retain a taint from those deeds (or, perhaps, when we find a place we believe to be tainted, we tend to try to find events to which we may attach the alleged taint), and 2) we see this as consequences of bad action, a cautionary tale, so to speak.

The second type of story involves the general "bumps in the night" that tend to get associated with most historic buildings. This includes the sounds of diners and of hotel residents moving about. Usually these stories are creepy because they are "unnatural", but have little menace implied in them. However, as the story of Room 46 shows, even these stories can take on more disturbing aspects.

The third story, that of the ghostly girl who appears and interacts with guests, is typical of another type of ghost story. Children who die early are often the subjects of ghost stories, and are usually either pitiable – Sarah is sometimes seen crying for her mother – or else cute and charming – Sarah is also often said to be interacting with people in a very friendly manner. The deeper cultural meaning of these stories is not clear, but it likely results from the fact that most adults view the death of a child as a heartbreaking event, even if they did not know the child (I used to visit cemeteries on a regular basis and had to stop going to those that had a section of graves for children, I found the situation too upsetting). In a way, the presence of the ghost, while potentially unnerving, is also reassuring, it lets us think that she will remain an idealized pure and innocent child for eternity, and that perhaps her untimely death was not the end of the story.

Personal Experience: In December of 2009, I had the good fortune to attend a role-playing game mini-convention hosted at the Brookdale Lodge. The games all had a horror theme, so placing them in a haunted hotel was appropriate. The lodge, however, is in poor repair. The guest rooms, which are in a separate building from the rest of the facilities, were actually quite nice, if a bit strange in their set-up (there was no way to use the curtains to keep out the morning light, because the curtains were on windows that didn't get the morning light, curtains hung over the heater, preventing its operation, etc.). The rest of the lodge, though, including the lobby, dance floor, meeting room (which is called the Log Cabin because it is, well, in a log cabin attached to the rest of the building) were in a bad state. Parts of the ceiling had collapsed in, many of the light fixtures were broken, and we were experiencing extremely heavy rains, so leaks in the roof resulted in soaked floors in much of the establishment. Add to this that, due to the storms, the power kept going out, and quite literally half of the time that we were gaming, it was under candlelight or battery-powered lanterns, and you can imagine that the eeriness of the place really began to get to us.

For any other event, this would have been disastrous. For a horror game convention, this was perfect, and we all had a blast - in fact, when power was restored, most of the players clamored for the lights to be turned back off, as we had worked out a tremendous sense of atmosphere with the candles and battery-powered lanterns.

In between evening games, and after gaming had completed for the evening (around 1 AM), we would go exploring the lodge. Exploring the Mermaid Room was especially unnerving. The pool is closed, as is the bar in the room, and the room's floor was covered in water (not from the pool, but from multiple leaks in the roof), and with the lights out, the room had a truly creepy atmosphere. The general consensus was that everyone who entered the room kept expecting to hear a thud from the glass wall, and to see that a corpse had floated through the swimming pool and bounced up against it.

One of my fellow convention-goers ended up in room 46, and he claims to have heard someone clearing their throat when nobody but him was in the room. He was sitting on the bed writing a text message when he heard the sound immediately to his right. He decided that the best thing to do was to act as if he hadn't heard it, and continue with his message.

A couple of teenage girls had been brought to the lodge by the mother of one of them as a birthday gift - they wanted to spend the night in a haunted hotel. They claimed to have heard the spectral party in the mermaid room, as well as to have heard a crash without a source in the room adjacent to the Mermaid Room that contains a stage and dance floor. However, given that one of my fellow gamers had decided to sneak around the place and jump out at these girls and generally make noise, it is open to discussion just how much of the stories that the girls told were their imaginations, ghosts, or rowdy gamers.

I took my camera with me, of course, and took the following photos in the Brook Room shortly after sunset: 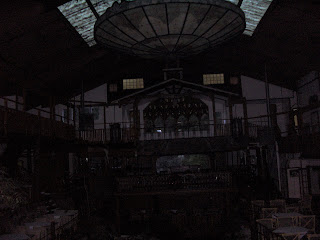 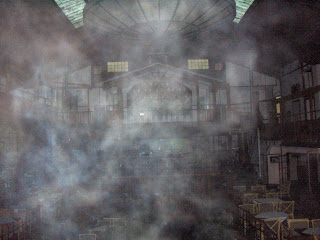 These photos were taken within 30 seconds of each other, and I don't know what the white haze is. My girlfriend suggests that it may be my breath condensing in the air in front of the camera, entirely possible as it was rather cold in the Brook Room. It may also have been some other camera malfunction, or the flash reflecting off of moisture in the air (edit to add:  In the years since I first wrote thus entry, I have become a much more proficient photographer, and it's now clear that vapor reflecting a flash is the cause). Basic point - seeing something weird on a camera does not a ghost make, cameras malfunction sometimes, and flashes can create weird visual artifacts. Still, when you are in a hotel with a haunted reputation and you see something like this just as the sun has gone down...well, it kinda' makes you shudder just a little.

The rest of these photos were taken between 1 AM and 2 AM. I wandered through the brook room, feeling a bit creeped out the entire time, and simultaneously hoping that I would get an image of something unnatural, and that my photos would end up prosaic and boring. Well, I got prosaic, but the images do give a feel of what the place was like with all of the lights out: 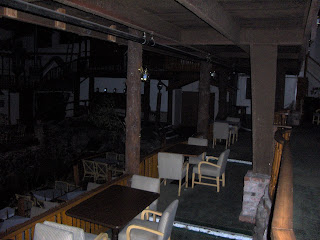 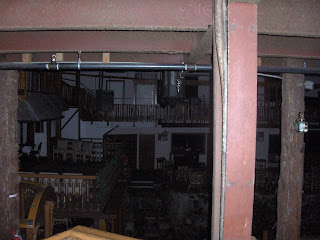 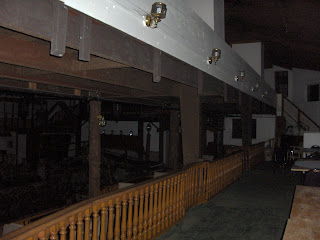